When I got off the bus at five in the morning, a pale sun was rising - very far from Vancouver, the clean city, and the alpine country around Jasper… still a bit dazed, I collected my luggage. It was almost mid-August but at that latitude (60°41’ north), the days were still long. The air was damp and cold and no one was about. Brock and I wandered round the town, which was slowly waking up. We had our first contacts with young Amerindians, who asked first for cigarettes, then for money, but without being aggressive… as if these requests were normal. We went into a place which would be difficult to define for the French … a sort of bar, but which didn’t serve alcohol… half-way between a fast-food and a cafeteria. The coffee was bad by European standards and the croissants very second-rate by mine! And what was more, everything was much too sweet! 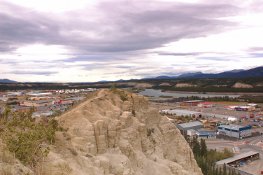 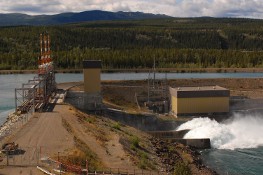 We then set off to look for a camp site, which we found half an hour’s walk from the centre. This site was called “Robert Service” after an Englishman who immigrated to Canada in 1894. The bank where he worked transferred him to Whitehorse, and inspired by the wilderness in the area he turned out to be an excellent author who had the knack of describing in detail the great north land all around. His pœm “The cremation of Sam McGee” made him internationally famous, and deeply respected by the inhabitants of the Yukon. Oddly, he later decided to move to France, where he ended his days…

This “White Horse”, situated on the famous Alaska Highway - usually called the AL-CAN - is the only way towards Dawson City, built by and for gold diggers. Some of them even went further north towards the frozen wastes near the Arctic. The 25 636 inhabitants of the capital of the Yukon occupy a huge area, on the scale of a province which has 31,530 residents, the area of which is comparable to Spain or Sweden. I explored the town, climbing up towards the airport, which is built overhanging residents’ houses - it occupies a rather strange situation (see the photo on the left).

The following days I explored the town and its surroundings. Until then I couldn’t get away from my imaginings of the Gold Rush at the end of the 1800s, recalling constantly Jack London’s books which were part of this “fever”, such as “White Fang”, “The call of the wild”, “To build a fire”…. I must admit however that I was a bit disappointed … what was left of that marvellous epic time, so well depicted by Charlie Chaplin in “The Gold Rush”, a silent film dated 1928, except some traditional pictures, faded posters, or old photos in the local museum… As for the short film shown by the Tourist Office, as I soon discovered, it was far from being even a reflection of reality. 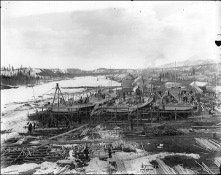 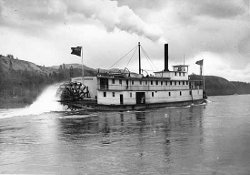 Is it politically correct to mention the Indian problems? In Whitehorse, the locals didn’t tell me what they thought, yet it was clear that the situation was a tragic one. The news items in the local paper were obviously not exaggerated: alcoholism, drugs, violence, arrests … these reflect the present situation of many of these first inhabitants, culturally smothered by their invaders, unable to adapt to an imposed lifestyle which maintains them in a state of dependence, weakened by food and drink which dœsn’t suit them… a whole series of problems which can’t fail to add fuel to the inevitable tensions and resentments between the two communities. All North America, in fact, is confronted with this same problem, but here, where the natives are numerous, it is much more obvious. I found myself right out in front - witness to the decline of the descendants of tribes which occupied enormous territories, as one can see when visiting the relative sections of the Washington Museum, the Smithsonian or the McCord Museum in Montreal, devoted to the First Nations. In the streets of the town, Indians of all ages begged from passers-by, some of them “spaced-out” and wandering. I would like to think that things were better in the reserve (what a terrible degrading name!) and that some of them remained sober and fulfilled. What I saw and learnt there, sadly, didn’t convince me, however. The wisdom of their ancestors which filled me with admiration and respect was only a far-off memory - it was difficult to even imagine the difference between these Indians and their ancestors.

In these territories, very much off the beaten track, and therefore difficult to exploit, the river is the vital link. The Yukon, which gave its name to the Province, was the means used by thousands of trappers and adventurers of all sorts to make their way towards the North, seeking for nuggets or furs. Before being domesticated by developments and the hydro-electric dam, the river was more dangerous than it is today. Paddle steamers (sometimes built on the spot) went up and down, bringing materials, food and necessary products for the pioneers, and a whole lot of small shopkeepers, who had also struck it lucky! Gold and mineral mines are no longer what dreams are made of, and the gold seams, several of which are still worked, are now in the hands of powerful consortiums. 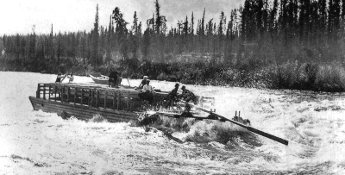 Another resource which brings in some money during a short part of the year is tourism. These tourists come mainly from Canada and the United States, though I also met Germans, French, and Japanese. Once the tourists have visited the McBride Museum, however, had a look at the paddle steamer, the S.S. “Klondike”, and checked out the remaining “Log Skyscrapers” (houses several floors high built of wood), they move further on. Those I saw in the camp site were mostly cyclists and “bikers” who just make a short stopover. The other campers were seasonal workers in the hotels and restaurants who are careful with their money and camp in order to save up.

I was going to forget the salmon ladder … built of wood, it’s supposed to be the longest in the world - 266 metres long by 15 metres high. Below the town, the hydrœlectric dam, built in 1958, used to stop the salmon going upstream to their spawning areas, the end of a journey of more than 3,000 kms. In order to preserve the species, therefore, the authorities built a sort of lock or ladder which lets the fish pass through fairly easily, and swim upstream as before. Some of them, which have survived several of these trips, weigh more than 40 kilos.

Once I’d thoroughly explored the administrative capital of the Yukon I started looking for a job. After a few tries I found one, to replace a dish-washer in a restaurant. Apparently it was the largest, if not the best. The menu was salmon and caribou, probably farmed… This was a “first” as far as I was concerned, but as all jobs are worth doing, and someone has to wash up the customers’ dishes and scrape out the chef’s saucepans!

After my first night’s work my hands were in a terrible state - fortunately, though, the rest of the team were really nice. My ability to dive in the Mediterranean holding my breath gave me the courage to stick it out for a week. Having earned enough for the moment, and telling myself I wasn’t there to earn a qualification as a washer-up, I started thinking about going further south where I’d heard there were jobs picking apples and pears in the warm fertile region of Okanagan in the south of British Columbia, 2 500 km lower down. It was starting to get colder and colder, the tourists were departing, the hotels and even the campsite were emptying.

To go alone further north I would have needed transport, which I didn’t feel enthusiastic about, particularly as I didn’t want to take the risk of travelling alone… Organised expeditions cost the earth and staying in National and Provincial parks are expensive, and there are many rules and regulations. In that region, for example, it’s compulsory to own or hire special containers in which to keep one’s possessions out of reach of bears. My ideas about long trips in the Yukon, therefore, didn’t work out. 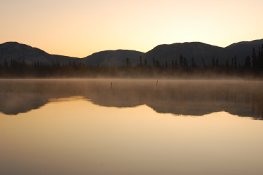 It was then that I caught up with two Frenchmen I’d met in the camp site. They had talked about going down the river from Whitehorse to Dawson City, about 700 km by canœ. The plan in fact was more complicated than it seemed, and should have taken two weeks … in fact, however, it took 23 days … One part of the trip was to be on a wooden raft, which would serve as living quarters. They needed someone to hold the video camera and take photos, and as the person who was to have done the job had dropped out, I offered my services.